The 49ers are set to re-sign defensive lineman Ronald Blair, according to Jennifer Lee Chan of NBC Sports Bay Area. The deal – pending the outcome of his physical — will give Blair a chance to return after botched ACL surgery. 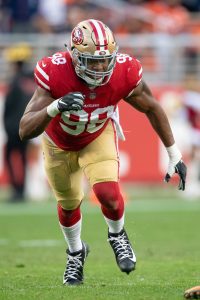 Blair ruptured his ACL midway through the 2019 season, which should have given him enough time to return for 2020. Unfortunately, something went wrong while Blair was on the operating table, leaving him sidelined for the entire year.

Before all of that, the former 2016 fifth-round pick enjoyed a spot in the Niners’ defensive rotation, compiling 13.5 sacks across four seasons. This year, he could be in line for an even larger role, depending on how newcomer Samson Ebukam is used. The Niners deployed Ebukam as an outside linebacker, but could see more time up front in 2021.