The 2021 NFL Draft offers a handful of top-tier cornerback prospects, and the first one is finally off the board. With the ninth-overall pick, the Panthers selected South Carolina cornerback Jaycee Horn. 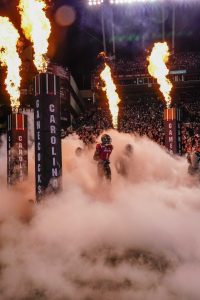 It always seemed like a foregone conclusion that Horn would be selected in the first round of the draft; it was just a matter of if he’d be the first cornerback off the board. He ultimately earned that distinction, beating out the likes of Patrick Surtain and Caleb Farley.

The son of former Pro Bowl wideout Joe Horn, the defensive back prospect has more than family pedigree on his side. Standing at 6-foot-1 and 200 pounds, Horn possesses the rare combination of speed and physicality. The prospect undoubtedly has the talent to become one of the top players at his position, and the Panthers are clearly bullish on his potential.

Horn was on the draft radar for several years following solid campaigns in 2018 and 2019. He seemed to elevate his play in 2020, collecting a pair of interceptions, six passes defended, and 10 tackles in only seven games. However, following the dismissal of head coach Will Muschamp, Horn sat out the final stretch of the 2020 campaign.

Considering the draft capital that the Panthers gave up for Sam Darnold, it’s a bit of a surprise that the front office didn’t look to provide their new quarterback with offensive line help. Still, it’s hard to be critical of the Horn selection. Carolina’s current depth chart consists of Donte Jackson and Troy Pride, so the rookie will probably be a starter from Day 1.