The Broncos didn’t take a quarterback after all. With the No. 9 overall pick, the Broncos selected Alabama cornerback Patrick Surtain II. 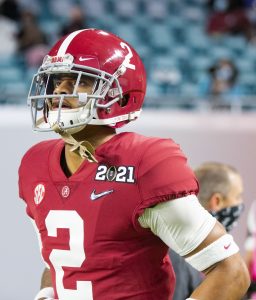 An All-American as a junior, Surtain finished with a career-high nine passes defensed this season, leading to SEC Defensive Player of the Years honors. That performance vaulted him up the draft boards, just shy of fellow corner Jaycee Horn.

We previously heard that the Cowboys were split between Horn and Surtain. Now, they’ll have to pivot. The Cardinals were also infatuated with both corners, so they’ll have to look further down the board when they pick in the middle of the order.

Surtain will follow his father, Patrick Surtain, into the pros. The elder Surtain was a longtime NFL corner who became a Dolphins second-round pick in 1998. An All-American as a junior, Surtain finished with a career-high nine passes defensed in 2020. Now, in Denver, Surtain will join a talented cornerback group that includes Ronald Darby, Kyle Fuller, and Bryce Callahan.

He’s the first defensive player drafted in Round 1 by the Broncos since 2018, when they tapped Bradley Chubb No. 5 overall. He’s also Denver’s first Round 1 defensive back since Bradley Roby in 2014.