The Steelers have been connected to first-round running backs throughout the pre-draft process, and everyone’s inkling proved to be correct. With the No. 24 pick, Pittsburgh selected Alabama running back Najee Harris. 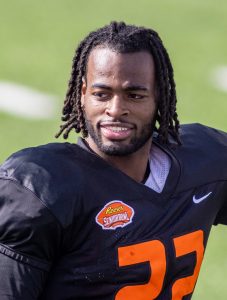 Initially buried on the depth chart, the Alabama product broke out as a junior in 2019 with an average of 5.9 yards per tote. Then, he passed on the draft to turn in an even more impressive 2020 season. Harris helped the Tide capture yet another National Championship while racking up 1,466 yards on the ground with similar efficiency (5.8 ypc). Those totals, coupled with 43 grabs for 425 yards and 30 total touchdowns, positioned Harris as one of the strongest prospects in the ’21 class.

Harris was connected to a number of RB-needy squads throughout the pre-draft process. While the prospect may lack the explosiveness of the NFL’s top running backs, he’s a dependable back who can contribute in every aspect of the offense. Those skills should allow Harris to see the field immediately for his new team. This is especially true in Pittsburgh, as the team lost top running back James Conner earlier this offseason. Harris will likely take the veteran’s place atop the depth chart, with Benny Snell, Anthony McFarland, and Kalen Ballage serving as potential backups.

16 comments on “Steelers Select Alabama RB Najee Harris At No. 24”