Connected to several candidates to replace Ja’Wuan James at right tackle, the Broncos appear to have chosen a path here. They are signing Bobby Massie, Ian Rapoport of NFL.com tweets.

One of several tackles to work out for the team this week, Massie agreed to a one-year deal worth $4MM. Massie’s time in Chicago overlapped with Vic Fangio‘s. The Broncos HC was with the Bears during three of Massie’s five seasons in the Windy City. The Bears parted ways with Massie in March, declining his 2021 option. 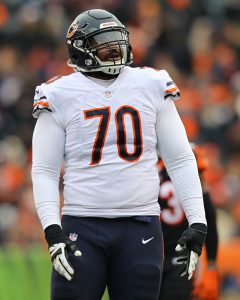 While this marks a big day for the Bears’ longtime tackle tandem, with Charles Leno signing with Washington, it provides the Broncos a veteran option at their second-most troublesome position. Brought in to stop a revolving door at right tackle in 2019, James missed most of that season and opted out in 2020. His Achilles tear is not certain to knock him out for all of 2021, but the Broncos placing him on the reserve/NFI list will prevent James from playing for them this season.

Massie, 32 in August, will be on track to be the ninth Week 1 Broncos right tackle starter in nine years. (The current list, for those curious: Orlando Franklin, Chris Clark, Ryan Harris, Donald Stephenson, Menelik Watson, Jared Veldheer, James and Elijah Wilkinson.) With James out of the picture, Wilkinson in Chicago and Massie on a one-year deal, this streak may well reach 10 in 2022. But Massie checks off a key need for the current Broncos, who have been linked to another longtime NFC North performer at quarterback.

Whether it’s Drew Lock, Teddy Bridgewater or Aaron Rodgers at quarterback, the Broncos had a major blocking vacancy. The James injury prompted them to bring in four tackles — Massie, Dennis Kelly, Jermaine Eluemunor and Cameron Fleming — for auditions. The Broncos also checked in on Leno, but he preferred to stay at left tackle and will do so in Washington. Denver added 2019 UDFA tackle Ryan Pope this week as well.

A former Cardinals fourth-round pick, Massie broke into Arizona’s starting lineup as a rookie. He served as the Cards’ primary right tackle in 2012, 2014 and ’15. The Bears signed Massie in 2016 and used him as a starter in 64 games. Pro Football Focus slotted Massie 36th among tackles last season. He graded just outside the top 30 in 2018 as well.