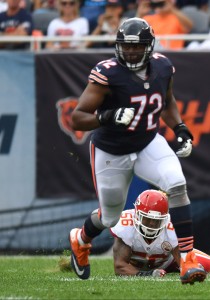 The Bears cut Leno earlier this month after investing a second-round pick in tackle Teven Jenkins. Washington, meanwhile, chose Texas tackle Samuel Cosmi in Round 2. Cosmi may be the long-term solution at LT, but they’ll ease him into the role with Leno as the stopgap starter.

Washington hasn’t had a solid left tackle since things went south with Trent Williams. Leno isn’t on Williams’ level, but he has been an LT starter for the past six seasons, serving as Chicago’s blindside protector from 2015-20. Pro Football Focus graded Leno as a top-25 tackle in three of the past four seasons, including the 2020 season. He’s durable, too; Leno hasn’t missed a game since his rookie year.

The Broncos also had Leno on their radar as they look to replace the injured Ja’Wuan James. Now, they’ll consider other veterans such asBobby Massie, Dennis Kelly, Jermaine Eluemunor and Cameron Fleming.