As of now, the Broncos have not traded for Packers signal-caller Aaron Rodgers. Unless and until Rodgers is dealt to Denver, 2019 second-round pick Drew Lock and new trade acquisition Teddy Bridgewater will engage in an open competition for the team’s starting QB job. 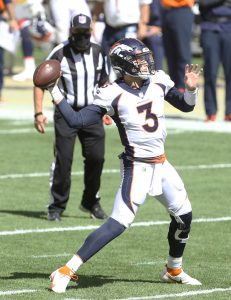 Head coach Vic Fangio confirmed as much in an interview with Mike Klis of 9News.com. Although Fangio conceded he wasn’t sure which of Lock or Bridgewater would get the first set of reps in OTAs or training camp, he said, “it will be something that at the end of the day, maybe not at the end of every day, but over the course of OTAs and training camp, it’ll be 50-50.”

Lock only has 18 career starts to his credit, but he is already being mentioned as one of a number of failed QBs that led to John Elway‘s loss of decision-making power. In 13 games last season, the Missouri product threw 16 TD passes against a league-worst 15 picks, leading to a poor 75.4 quarterback rating.

Bridgewater was a a little better in his lone season in Carolina, but his 2020 campaign can fairly be characterized as disappointing as well, especially when measured against the three-year, $63MM contract he signed with the Panthers last offseason. He offers the experience and accuracy that Lock does not have at this point, though Lock’s ceiling is higher.

Fangio, predictably, had good things to say about both passers. “I think Drew’s had a helluva offseason up to this point, albeit we haven’t been on the field,” he said. “I think Drew is going to look good here in the offseason when we do hit the field. And I’ve been an admirer of Teddy Bridgewater for many years. … He’s a good football player. A good quarterback. He’s got deceptive scramble ability. He’s got really good pocket feel. He’s got great leadership abilities. I think he’s an accurate passer and processes very well so we’re happy.”

Regardless of which player wins the job, the Broncos currently have the least desirable QB situation in the AFC West. But new GM George Paton passed on the opportunity to draft a quarterback like Ohio State’s Justin Fields, so he obviously feels good enough about where things stand right now. However, the rest of Denver’s roster looks pretty strong, and the team could be one elite QB away from making serious noise in the AFC. As such, a Rodgers pursuit could still be in the cards.

4 comments on “Broncos To Split QB Reps 50-50 Between Lock, Bridgewater”