Teddy Bridgewater is going to the Broncos. The Panthers have agreed to send the quarterback to Denver in exchange for a sixth-round pick, as Tom Pelissero of NFL.com tweets. 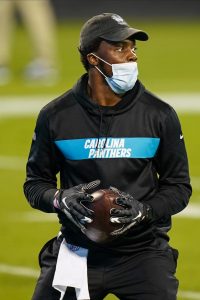 As a part of the deal, the Panthers will pay out $7MM of Bridgewater’s salary for the coming year. The Broncos will only take on a fraction of his pay, at $3MM. With the Panthers eating the lion’s share of what’s owed to Bridgewater, the Broncos remain open to quarterbacks in the first-round of Thursday’s draft, Adam Schefter of ESPN.com (on Twitter) hears.

Bridgwater represents new competition for Drew Lock, who was already facing the possibility of competing with rookie QB selected with the No. 9 pick. Last year, Lock’s QBR put him near the bottom of the league. In turn, the Broncos tried to swing a deal for Matthew Stafford, but the Rams beat him to the punch. The Broncos didn’t see Carson Wentz or Sam Darnold as worthwhile upgrades, but Lock’s seat has stayed hot throughout the offseason.

Broncos GM George Paton had an up close look at Bridgewater during his salad days with the Vikings. Paton was with the team when they selected the Louisville product in the first round of the 2014 draft. That familiarity likely put Bridgewater ahead of Gardner Minshew, Jimmy Garoppolo, and other available passers on their wish list.

Bridgewater has two seasons left on the three-year, $63MM deal he inked with Carolina. The 28-year-old (29 in November) completed 69% of his passes in 2020 with just 15 touchdown throws. While the Panthers chose Darnold’s upside over another year with the veteran, he still profiles as a solid alternative to Lock.

The Panthers now own the No. 191 overall pick, but the real upside comes in the form of financial relief. Now, GM Scott Fitterer has a few more dollars to work with, plus a substantially lighter cap for 2022. Meanwhile, Darnold may have a little more confidence moving forward as he looks to reboot his career in the NFC South.