The Falcons will not exercise the fifth-year option on tight end Hayden Hurst (Twitter link via ESPN.com’s Jeremy Fowler). Hurst, a 2018 draft pick of the Ravens, is now on track for free agency in 2022. 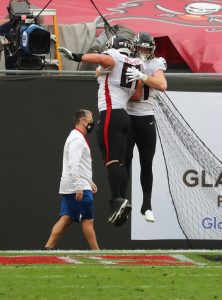 The Falcons traded for Hurst last spring just after Austin Hooper left in free agency. In exchange, the Falcons sent second and fifth round picks to Baltimore while receiving a fourth-round pick along with Hurst.

Hurst immediately took a backseat to Mark Andrews — a third-rounder — in 2018. He missed the early part of his rookie season with a stress fracture in his foot and the injury nagged him even after his return. Hurst ended up catching only 13 passes for 163 yards that year. In 2019, he fared a bit better — 30 catches for 349 yards and two touchdowns.

This past year, the South Carolina product had the best statistical season of his career with 56 grabs for 571 yards and six scores, However, the Falcons are now set to install Kyle Pitts as their top TE, making Hurst expendable.