The Eagles have re-signed tight end Richard Rodgers, per a club announcement. The longtime Packer will return for his fourth straight season with the Eagles on what is likely a one-year pact. 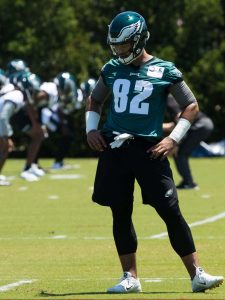 Rodgers appeared in 13 games and started four times for the Birds last year and recorded 24 catches, 345 receiving yards and two touchdowns. He’s best known for the Hail Mary ball he caught from Aaron Rodgers in Detroit several years ago, but Rodgers actually nabbed eight TDs in that 2015 season. Between 2017 and 2018, he recorded just one catch for seven yards amidst injuries, but he saw a healthy number of targets with the Eagles in 2020.

For now, Rodgers projects to serve as the No. 3 tight end behind Zach Ertz and Dallas Goedert. However, Ertz could very well get traded between now and Week 1, creating extra room for Rodgers, Jason Croom, Caleb Wilson, Hakeem Butler, and the rest of the roster hopefuls at TE.