Although the Jets still have higher-profile rookie contracts to finalize, they are done with the Michael Carter section of their rookie deals. The first of the team’s two Michael Carters chosen, the fourth-round running back signed his four-year rookie pact Friday. 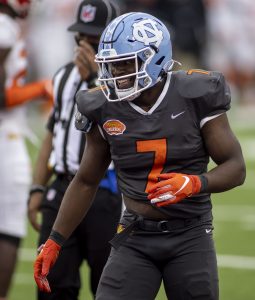 This comes nearly a month after fifth-round defensive back Michael Carter agreed to terms. These two played against one another in the ACC and both have paths to immediate playing time. A former North Carolina running back, this Michael Carter figures to become a higher-profile name sooner — perhaps due to the fantasy realm.

Carter split time with Broncos second-round pick Javonte Williams with the Tar Heels and ripped off back-to-back 1,000-yard rushing seasons to close his college career. The 5-foot-7, 201-pound back delivered an efficient senior season, averaging 8.0 yards per carry to reach 1,245 and nine touchdowns for a potent Tar Heels ground attack.

The Jets signed Tevin Coleman this offseason, and although the former Falcons and 49ers back has extensive experience working with OC Mike LaFleur, he has battled constant injury trouble over the past two seasons. Carter, who figures to compete for playing time ahead of his rookie season, also joins 2020 fourth-round pick La’Mical Perine in the Jets’ post-Le’Veon Bell backfield.

Of the Jets’ 10-man draft class, seven members have signed. Only the team’s first- and second-rounders — Zach Wilson,Alijah Vera-Tucker and Elijah Moore — are unsigned.