The 2001 free agency period featured some key players change teams. Simeon Rice and Priest Holmes relocated and soon became All-Pros, and the Buccaneers landed eventual Super Bowl starter Brad Johnson. But the biggest name available that year was not up for debate. 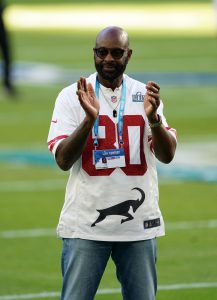 Jerry Rice became a free agent 20 years ago today, and although he did not last long unattached, the legendary wide receiver hitting the market was certainly notable. The 49ers made Rice a cap casualty on June 4, 2001, taking advantage of the post-June 1 cut designation that allowed for cap relief. Because post-June 1 cuts at this point required the team to make such moves after that date, another free agency wave took place annually.

This ended Rice’s storied 49ers tenure, which lasted 16 years and saw the eventual 20-year veteran set every major career receiving record there is. Rice signed a seven-year, $32MM contract in the summer of 1996; that deal was set to take him through the 2003 season. The 49ers and their all-time great agreed to multiple restructures, including a redo in 2000. Rice said at the time of the last restructure he wanted to finish his career in San Francisco, but that did not end up coming to pass.

The 49ers prepared for this transaction months ahead of it transpiring. Their Week 16 game against the Bears in 2000 doubled as “Jerry Rice Day,” with the then-38-year-old receiver playing his final game as a 49er at Candlestick Park. Terrell Owens, closing out his fifth season with the 49ers, did some reasonable upstaging by catching 20 passes to break the NFL’s then-50-year-old single-game reception record. A 1996 third-round pick who would end up following Rice to Canton, Owens earned the first of his five first-team All-Pro honors that season and had entrenched himself as San Francisco’s No. 1 wideout entering the 2000s. The last of Rice’s NFL-record 10 first-team All-Pro nods came in 1996.

Rice’s exit marked the end of a 49ers era, one that rapidly wound down after Steve Young sustained a career-ending injury in September 1999. Rice was to earn a $4.1MM salary in 2001, and although his first Raiders contract — a four-year, $5.4MM pact — called for him to make just $1.4MM that season, the veteran landed on his feet in Oakland. After playing on a 6-10 Niners team in 2000, Rice ended up helping the Raiders make the playoffs over the next two years.

He agreed to terms with the Raiders a day after his 49ers release, joining the Silver and Black ahead of what would be Jon Gruden‘s final season (of his first Raiders stay, that is). After back-to-back years in which he was held under 900 receiving yards, Rice rebounded with consecutive 1,100-plus-yard seasons in Oakland. The second of those, during the Raiders’ 2002 AFC championship campaign, produced his 14th and final Pro Bowl invite at age 40. The Raiders gave Rice a six-year, $30MM extension in 2003.

One comment on “This Date In Transactions History: 49ers Release Jerry Rice”