The Cowboys have agreed to terms with third-round defensive end Chauncey Golston (Twitter link via NFL.com’s Ian Rapoport). With Golston signed, the Cowboys now have all eleven picks in the fold. 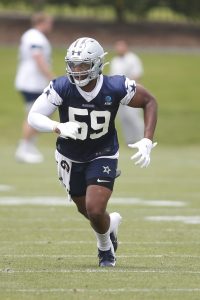 Golston was grabbed with the 84th overall pick, shortly after the Cowboys selected UCLA defensive tackle Osa Odighizuwa. Together, the two rookies will work to bolster the defensive line depth. Golston will support starters DeMarcus Lawrence and Randy Gregory, provided that he can outrank options like Tarell Basham, Dorance Armstrong, and Bradlee Anae. He could also see time on the interior, like he did at Iowa.

“At the end of the day, it’s just football,” Golston said earlier this year. “As long as you’re preparing the right way and you’re not — if I was to just train on the left side, then playing on the right side would be hard. But I’m trying to be as versatile as possible. So, I train on both sides.”

Now that Golston and cornerback Nahshon Wright have agreed to terms, the Cowboys have all of their rookie paperwork squared away. Here’s the full rundown of their 2021 draft class: