Richard Sherman‘s July arrest put quite a damper on his market, but things are starting to heat back up. Several days ago, we heard that the 49ers remain interested in a reunion with the five-time Pro Bowler, and Tom Pelissero of NFL.com reported this morning that multiple teams have reached out to Sherman recently. 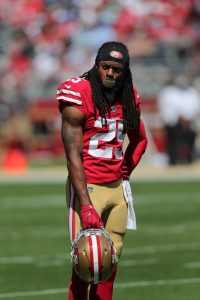 One of those teams is the Buccaneers, who lost starting CB Sean Murphy-Bunting to a dislocated elbow in Week 1. Murphy-Bunting is now on IR and his return date is uncertain, so Tampa’s interest in a proven commodity like Sherman is certainly understandable.

It probably goes without saying, but nothing is imminent between Sherman and the Bucs at this point, as Rick Stroud of the Tampa Bay Times tweets. However, ESPN’s Ed Werder says the two sides could engage in more serious discussions this week, depending (perhaps) on how Tampa’s current crop of CBs holds up against the Falcons this afternoon (Twitter link). Regardless, Sherman will probably need a week or two of practice to be ready for game action.

Pelissero offers more details on Sherman’s legal matter. Although two of the five charges he is facing were said to include a “domestic violence element,” police say that Sherman never physically assaulted anyone. A source close to the player himself says Sherman — who pleaded not guilty to all charges — has been doing magnetic therapy and speaking with a therapist.

Also, Sherman is back down to 195 pounds, which is where he was during his halcyon days in Seattle. He gained 15 pounds following his 2017 Achilles tear, and he played at that slightly elevated weight throughout most of his three-year tenure with the 49ers.

Of course, there is the potential for league discipline. The NFL is monitoring the criminal case but is unlikely to take any action until the legal process has run its course. So even if Sherman is available to play as soon as he signs, he could be hit with a suspension later on, perhaps at a critical juncture of the season. Indeed, Sherman is facing a driving under the influence charge, and the league’s substance-abuse policy calls for a minimum three-game ban for a first DUI offense.

For his part, Sherman expects to see the field at some point in 2021. Given the renewed interest in his services, it looks like he could be right.