DeMarcus Lawrence is out indefinitely. The Cowboys defensive end suffered a broken foot at practice and will be sidelined for the foreseeable future, according to NFL Network’s Ian Rapoport (via Twitter). The news was first reported by Joe Trahan of WFAA (on Twitter). 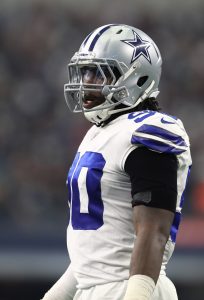 It’s uncertain if the injury will end Lawrence’s season, reports Michael Gehlken of the Dallas Morning News (via Twitter). Doug Kyed of Pro Football Focus notes (on Twitter) that “there’s optimism it’s not season-ending,” while one source tells NFL Network’s Jane Slater that Lawrence will be sidelined for six to eight weeks (Twitter link). Rapoport has clarified that Lawrence broke the fifth-metatarsal in his foot and will need surgery, but if everything goes well, the pass rusher could be back by November.

This is a tough break for the Cowboys and their depleted pass rush, especially since Randy Gregory could also miss this weekend’s game after testing positive for COVID-19. Dallas was one of only two teams without a sack in Week 1, and their pass-rushing hopes will now depend on the likes of journeyman Tarell Basham.

Lawrence earned a pair of Pro Bowl nods in 2017 and 2018 after combining for 25 sacks between the two seasons. He hasn’t come close to matching that production since, but he was still productive in 2019 and 2020, collecting 11.5 sacks and 26 QB hits in 32 games (31 starts). The veteran started the offseason on PUP as he recovered from back surgery, but he still got back in time to appear in Week 1. He collected five tackles and one forced fumble in that contest.

It’s been a rough few days for the Cowboys after losing their season-opener to the Buccaneers. Lawrence fractured his foot, Gregory tested positive, right tackle La’el Collins was suspended, and receiver Michael Gallup was sidelined for at least the next month.