The Jaguars have released wide receiver Phillip Dorsett from their practice squad (Twitter link via Field Yates of ESPN.com). The 28-year-old could potentially return after some roster jockeying, but it’s not clear if that’s in the cards. 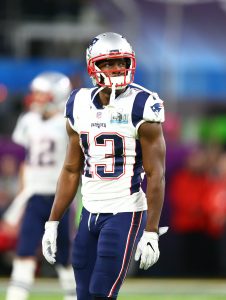 Dorsett joined the Jags in the spring but he did not make it through final cuts. Despite his on-and-off relationship with Urban Meyer & Co., Dorsett still offers an impressive resume including two trips to the Super Bowl and a ring from in SB LIII with the Patriots. The veteran only hauled in 73 receptions for 881 yards and eight touchdowns in 45 games for New England, but he still offers special teams upside.

To date, 2016 stands as Dorsett’s most productive year. In 15 games with a career-high seven starts, Dorsett caught 33 receptions for 528 yards and a pair of TDs with the Colts.