After several weeks off the grid, Richard Sherman has now been connected to three teams since his July arrest. The former All-Pro cornerback has spoken with the Buccaneers and 49ers, and Albert Breer of SI.com notes a Seahawks reunion remains on the table. 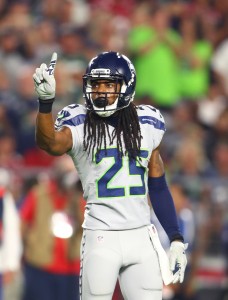 The Seahawks and Sherman had discussions this offseason, and the 10-year veteran was open to returning to the team. But nothing materialized. Sherman’s subsequent arrest, which produced five misdemeanor charges, paused his free agency bid. Although two of the five charges he is facing were said to include a “domestic violence element,” police say that Sherman never physically assaulted anyone. Momentum continues to build for Sherman to latch on with a team and play an 11th season.

Sherman, 33, is aiming toward playing this season, per Breer, who adds the Seahawks recently reached out to him. This creates an interesting in-season pursuit, with the 49ers and Sherman also engaging in dialogue recently.

While no deal is imminent between Sherman and the Bucs, the defending Super Bowl champions have done well to stock their roster with high-end veteran starters since acquiring Tom Brady. Should Sherman sign with Tampa Bay, he would make five All-Decade performers — along with Brady, Rob Gronkowski, Antonio Brown and Ndamukong Suh — to join the team in the past 18 months.

As for the Seahawks, they have been in need at corner for a while. After letting Shaquill Griffin walk in free agency, the Seahawks traded UFA addition Ahkello Witherspoon to the Steelers. Interestingly, Sherman helped steer Witherspoon, his former 49ers teammate, to Seattle. The Seahawks are using fellow ex-49er D.J. Reed and Tre Flowers as their boundary starters. The 49ers may possess a greater need, with Jason Verrett out for the year. This could set up an unusual early-season bidding war.

Seattle made Sherman a cap casualty in 2018, leading him to San Francisco. After an unremarkable 2018, Sherman re-emerged and earned second-team All-Pro acclaim while helping the 49ers to a Super Bowl. A calf injury kept Sherman out of 11 games last season, but the accomplished cover man is believed to have slimmed down to his Seahawks-years playing weight of around 195 pounds. A suspension may come down this season, or possibly be tabled until 2022, but Sherman could well be on his way to playing a key role in a loaded NFC West race.