The Browns have designated Jarvis Landry for return, per a club announcement. The wide receiver will be eligible to play as soon as Sunday, when the Browns face the Cardinals. 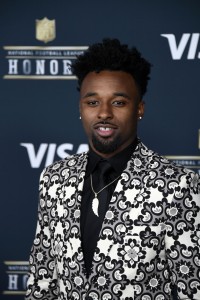 Landry went down with a knee injury during the Browns’ Week 2 opening drive. The Browns still went on to beat the Texans 31-21, but they lost Landry for the following games against the Bears, Vikings, and Chargers. Fortunately, they got Odell Beckham Jr. back at the exact same time — he snagged five passes for 77 yards in his debut. OBJ has been quieter the last two weeks, but he should benefit from the attention that’ll be paid to Landry.

Through two games (really, one game and change), Landry has six catches off of six targets for 80 yards. He also notched a rushing touchdown — the fourth rushing TD of his career — against the Chiefs in Week 1.

Per league rules, the Browns will have a 21-day window to activate Landry. It’s a use-it-or-lose-it proposition, but there’s no reason to think that Landry won’t return in the coming days. If he can’t go against the Cardinals, he’ll likely be ready for Week 7 against the Broncos.