The Dolphins could complete a trade for Deshaun Watson as soon as this week, according to John McClain of the Houston Chronicle. The deadline isn’t until November 2nd, but the Dolphins are aiming to land the quarterback even sooner. 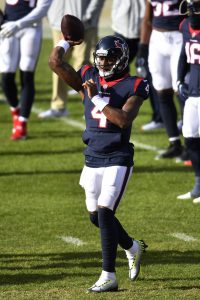 There’s been conflicting word on the Dolphins’ level of interest in Watson, but owner Stephen Ross seems willing to bring the embattled QB to South Beach. Meanwhile, the ‘Fins have an increased sense of urgency after dropping their fifth straight game to the previously winless Jaguars.

So far, Texans GM Nick Caserio has warded off suitors with a skyhigh asking price — three first-rounders and two second-round picks (or, two starting-caliber players). He’s also been unwilling to accept conditional choices tied to Watson’s availability, but it’s possible that he’ll bend in order to stock up for the 2022 draft and move on from the Watson mess.

Watson has a no-trade clause, but he’d happily accept a trade to Miami. The Saints have also been rumored as a dark horse candidate for Watson, but they don’t seem as motivated as the Dolphins.

If the deal goes down, Watson will have an opportunity to face his former club on November 7th.