One day after getting cut by the Vikings, RB Ameer Abdullah has found his next gig. Abdullah visited with the Panthers on Wednesday and has officially signed with Carolina, the team announced. NFL Network’s Ian Rapoport (via Twitter) first reported that a deal was expected. 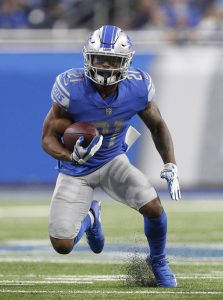 Abdullah started his career in Detroit, where he put up a pair of 700-plus-yard seasons. He fell down the depth chart in 2018 and was eventually claimed off waivers by the Vikings. He ended up spending parts of four seasons in Minnesota, topping out on a 203-yard season in 2019.

The 28-year-old saw time in all six games for the Vikings this season, collecting 30 yards on seven carries while adding another 17 yards via three receptions. The veteran has also hauled in seven kick returns for 162 yards, which is especially relevant with primary returnman Alex Erickson in concussion protocol.

Now, he’ll have a chance to stick around the NFL with the Panthers. Carolina will continue rolling with rookie fourth-round pick Chuba Hubbard as their primary Christian McCaffrey replacement, and they’re also rostering Royce Freeman and Giovanni Ricci. The Panthers added Reggie Bonnafon to their practice squad yesterday.