Good news for Richard Sherman. His latest MRI confirmed the early diagnosis, meaning that the cornerback’s hamstring injury will only sideline him for a couple of weeks (Twitter link via NFL.com’s Ian Rapoport). 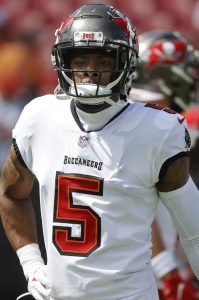 Barring a setback, the Buccaneers will not place Sherman on the injured reserve list. The 33-year-old tweaked his hammy during Thursday night’s win over the Eagles and will have to sit out for the next two contests against the Bears and Saints. After that, the Bucs have a Week 9 bye, giving Sherman additional time to heal up.

In the meantime, the Bucs will have to get by with a seriously depleted secondary. Corners Carlton Davis and Sean Murphy-Bunting are currently on IR and safety Antoine Winfield Jr. missed last week’s game with a concussion. Winfield may be on the verge of clearing protocol, so it sounds like he is trending towards playing against the Bears. At this time, head coach Bruce Arians says he’s not planning any out-of-house signings to reinforce the group.

In his two-plus games as a Buccaneer, Sherman did not hold up particularly well in coverage. When he returns, the three-time First Team All-Pro will try to turn back the clock and replicate his previous work.