Baker Mayfield will officially miss his first game since taking over as the Browns starting quarterback in 2018. The Browns announced that they’ll be without their starting QB tomorrow against the Broncos. Cleveland will have backup Case Keenum under center. 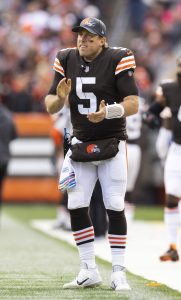 Keenum will have a chance to start against his former team, as the veteran started all 16 games for Denver back in 2018. He went 1-7 in eight starts with Washington in 2019, but he still got a three-year, $18MM deal from the Browns in 2020. In one-plus seasons with the team, the 33-year-old has seen time in four games, completing six of his 13 pass attempts for 52 yards.

“We have full confidence in him to lead us and do the things necessary to put us in position to win,” coach Kevin Stefanski said of Keenum. “Baker fought really hard to play, he’s a competitor and obviously wants to be out there but just couldn’t make it on a short week. We know he will continue to do everything in his power to return as quickly as possible.”

Mayfield suffered a shoulder injury back in mid-September, but he’s continued to play through the injury. He aggravated the injury during the Browns’ loss to the Cardinals on Sunday, and ESPN’s Jake Trotter writes that Mayfield was advised not to play by both team doctors and his own personal doctor.

Earlier this week, Mayfield clarified that he wouldn’t see the field if he ever thought he’d be hurting his team’s chances.

“Only I know how my body feels,” Mayfield said (via Trotter). “If anyone questions whether I am hindering the team and going out there injured, that’s just not right. It’s my decision. I get to say whether I am able to play or not, and that’s just how it is.”

9 comments on “QB Case Keenum To Start For Browns Tomorrow”