The Texans are waiving Anthony Miller, according to Aaron Wilson of Sports Talk 790 (Twitter link). The wide receiver will be available for the league’s other 31 teams on the waiver wire. 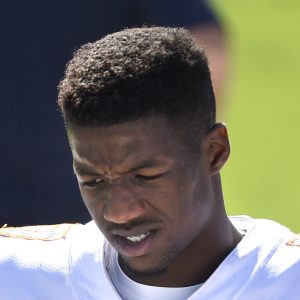 The Texans traded for Miller over the summer by sending a 2022 fifth-round pick to the Bears. Since then, he’s seen time in two games for Houston, notching five grabs for 23 yards with a touchdown. The bulk of that came against the Panthers in Week 3; he was hardly a factor as the Texans got drummed 40-0 by the Bills this past week.

Miller, the No. 51 overall pick in 2018, flashed potential at times but fell flat in 2020 — he took 49 catches for just 485 yards, despite playing all 16 games. Some say that shoulder issues limited him in Chicago. Assuming he’s healthy, he should hold appeal for other clubs in need. His seven-TD rookie year wasn’t all that long ago, and he also managed 656 yards as a sophomore.

The Texans, meanwhile, have replaced him with new addition Davion Davis.