Khalil Mack‘s season is over. The Bears’ All-Pro pass rusher is set for foot surgery that will sideline him for the rest of the year, according to NFL.com’s Ian Rapoport 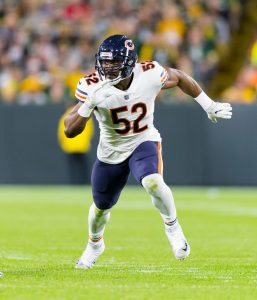 Mack missed the two Bears two games previous to their Week 10 bye. The Bears were optimistic that the former Defensive Player of the Year would be able to play this weekend, but the specialists have said otherwise.

Mack, 30, got off to a strong start this year with six sacks across the first six weeks of the season. Up until the foot injury, he had only missed two games during his three-plus-seasons in Chicago.

Acquired via a 2018 blockbuster trade with the Raiders, Mack has been the centerpiece of the past four Bears defenses. The former DPOY has delivered on the Bears’ investment, even though the gaudy Oakland sack totals have not followed him to Chicago. And, even though Mack’s double-digit sack streak ended after 2018, but was well on pace to post his fifth 10-plus-sack slate this year. Pro Football Focus graded Mack as its No. 1 edge defender in 2020, despite his lower sack (9) and QB-hit (13) totals.

Mack, who will be absent from the Pro Bowl list for the first time in a long time, remains under club control through the 2024 season. For right now, the Bears find themselves at 3-6, down both Mack and longtime defensive leader Danny Trevathan.