Browns tackle Jack Conklin is done for the year (Twitter link via Adam Schefter of ESPN.com). Now confirmed to have a torn patella tendon, Conklin will have to turn his attention to rehab with an eye on 2022. 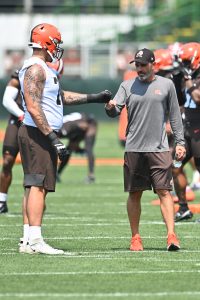 “That hurts to see Jack like that,” defensive end Myles Garrett said after Sunday’s game (via Cleveland.com). “I see the guy work every day, saw him work in training camp. I was part of the group that got him to come here. To see him have to deal with all these injuries, knowing what he’s going through and it’s tough to see, tough to watch and I feel for him.”

As noted by Garrett, this is just the latest malady for Conklin. In 2021 alone, he’s missed time with a dislocated elbow and a separate knee injury. It’s all amounted to a seven-game season, a disappointing follow-up to his stellar 2020. Last year, Football Focus rated him as the tenth best tackle in the NFL as he captured First-Team All-Pro honors for the first time in his career.

Blake Hance filled in after Conklin’s early exit, and he’ll continue to start at RT the rest of the way. The Browns can also be expected to add another tackle for depth during their Week 13 bye.