The Panthers have placed Christian McCaffrey on injured reserve, per a club announcement. Since this is his second trip to IR in 2021, the move will mark the end of the running back’s season. 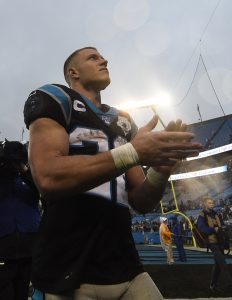 McCaffrey was forced out early yesterday as the Dolphins went on to win 33-10. The loss dropped them to 5-7 on the year, further crushing their slim odds of reaching the postseason.

The Panthers got off to a 3-0 start with McCaffrey in the lineup, then dropped four of five games without him. Even after his return, they’ve lost three of four contests, though the offense was clearly better with him in the backfield. His Week 10 showing performance against Arizona — 13 carries, ten catches, and 150+ all-purpose yards — propelled them to their only win in November.

Between the last two years, McCaffrey has appeared in just ten games for the Panthers. It’s hardly what anyone envisioned for CMC after he inked a $16MM-per-year extension in 2020. In 2019, his last healthy campaign, McCaffrey made a push for Chris Johnson‘s record with 2,392 scrimmage yards.

Now, his ’21 season will end with 442 rushing yards and one touchdown, plus 37 catches for 343 yards and one receiving TD across seven games. The Panthers will likely add another RB to the mix between now and their next game, a Dec. 12 matchup against the Falcons.