The Rams have signed Odell Beckham Jr. to a one-year deal, but this could wind up as a long-term arrangement. The Rams are hopeful that they’ll be able to sign Beckham to an extension, according to NFL.com’s Ian Rapoport (Twitter link), one that would keep him in Los Angeles for 2022 and beyond. 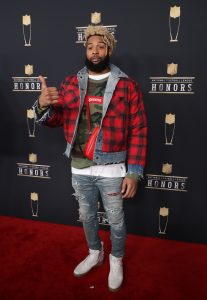 The Rams weren’t viewed as a leading suitor for Beckham, but, as RapSheet notes, they’ve actually had him on the radar for years. Sean McVay & Co. finally got their man this week, following Beckham’s messy divorce from the Browns. Before that, the Chiefs, Patriots, Saints, Seahawks, and Packers were viewed as his most likely destinations.

Beckham is now set to team with Cooper Kupp, Robert Woods, and youngster Van Jefferson, furnishing the Rams with one of the league’s most dangerous WR groups. Thanks in part to their efforts, Matthew Stafford stands as the NFL’s leading passer with 2,771 yards through the air. Kupp, meanwhile, leads the league in all major WR categories — 74 grabs, 1,019 receiving yards, and ten touchdown catches.

Of course, it won’t be easy to keep all their stars for the long haul, especially since newcomer Von Miller also needs a fresh deal. But, through salary cap magic, they’ve managed to keep much of the band together in recent years.

For now, they’ve got OBJ on a modest one-year deal worth up to $4.25MM. He’s expected to debut on Monday night, when the Rams face the 49ers in San Francisco.