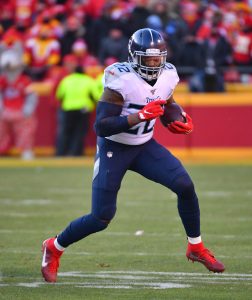 Doctors fear that Henry is dealing with a Jones fracture, which would require season-ending surgery (Twitter link via Schefter). Henry suffered the injury towards the end of the second half, but somehow managed to play through the pain in overtime. A Jones fracture would not allow for any further heroics in 2021.

Henry currently leads the NFL with ten rushing touchdowns and 937 rushing yards, far ahead of Browns RB Nick Chubb (584). He finished Sunday night with 28 carries for 68 yards, with some of those totes coming after the injury.

If Henry misses time, the Titans will be left with Jeremy McNichols, Khari Blasingame, and Dontrell Hilliard at RB. Of course, none of those tailbacks can replace Henry, who tallied 2,027 rushing yards last year en route to his second straight rushing title.

The Titans advanced to 6-2 after edging the Colts last night. They’ll likely be without their star running back in Week 9 when they face the Rams.