Corey Davis‘ season is over. On Monday, Jets head coach Robert Saleh told reporters the wide receiver needs core muscle surgery that will shelve him for the rest of the year (Twitter link via NFL.com’s Ian Rapoport). 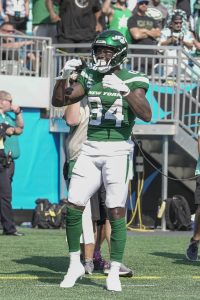 The silver lining is that core muscle surgery usually calls for 8-10 weeks of recovery. In other words, it’s nothing like an ACL rehab program, so Davis should be good to go for early offseason activities.

Davis played through the pain for several weeks, sat out for the Jets’ Week 12 win over the Texans, and returned yesterday to play 25 snaps against the Eagles. Unfortunately, he aggravated his groin injury to the point where he’ll have to go under the knife.

Davis’ season will end with 34 grabs for 492 yards and four touchdowns across nine games. Extrapolated for a full 17-game slate, that’s roughly in line with what the Jets were hoping to see. He’ll look to stay healthy next season in Year 2 of his three-year, $37.5MM deal.

In the meantime, the Jets will work with Elijah Moore, Keelan Cole, Jamison Crowder, and Denzel Mims as their top wide receivers. The 3-9 Jets, sans Davis, will host the Saints on Sunday.