The negotiations between the Giants and linebacker Blake Martinez have resulted in a new deal. Paul Schwartz of the New York Post reports that the veteran will be staying with the team, but at a reduced salary. 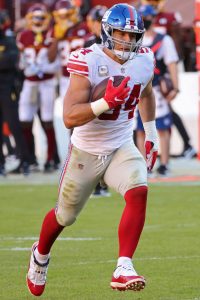 Earlier this week, the two sides discussed a re-working of his deal, as part of the wider need for the Giants to shed 2022 expenses. Martinez was due to make $8.525MM (the amount the team would save with a release), but carry a cap hit of just over $14MM. That led to the possibility he could be let go, but now he will stay in the Big Apple – unlike a number of veterans who have been cut in recent days.

The 28-year-old joined the Giants in 2020 after four seasons in Green Bay, including three as a starter. Between 2017 and 2019, the former fourth rounder totalled 443 tackles, nine sacks and a pair of interceptions. He delivered a similar performance in his first campaign in New York with 151 stops, two forced fumbles and five pass deflections.

Unfortunately, a torn ACL limited Martinez to just three games in 2021. His absence was felt on a Giants defense that allowed 129 rushing yards per game, which ranked 25th in the league. With him still in the fold, however, much of the cap gymnastics general manager Joe Shoen faced upon his arrival has taken place. The biggest remaining question on the roster now pertains to James Bradberry. Given the team’s need to cut costs, the highly regarded cornerback has been the subject of trade interest from a number of teams. Much of what Schoen does in free agency will depend on the organization’s handling of Bradberry’s contract.