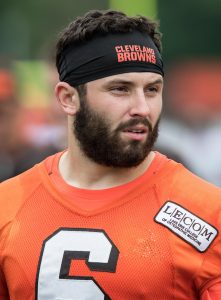 [RELATED: Browns Out Of Watson Talks]

For what it’s worth, there is a difference between a trade request and a trade demand. Jason La Canfora of CBSSports.com (on Twitter) hears that it’s the former, which may mean that a resolution is still possible.

The Browns’ pursuit of Deshaun Watson irked Mayfield, who was hoping to get back to his old form for Cleveland following shoulder rehab. The Browns offered to fly to Texas, meet with Mayfield, and talk things out. The quarterback has told them not to bother. Now, the Browns are out of the Watson sweepstakes and might not have Mayfield to fall back on.

Mayfield still has another year on his contract at a salary of $18.86MM. Given where the QB market is right now, that might be an appealing proposition for the Colts — a preferred destination for Mayfield.

The Browns regressed on the whole in 2021, compiling an 8-9 record and failing to make it back to the playoffs. However, it’s hard to judge Mayfield on an individual level, given the torn labrum on his non-throwing side. The QB finished near the bottom of the league in of QBR, but he was top ten league-wide just one year prior. That 2020 campaign resulted in a divisional round appearance and what looked to be the start of something special.