The league’s top free agent receiver has reportedly found a new home. The Rams are signing Allen Robinson to a three-year, $46.5MM deal, per NFL Network’s Tom Pelissero (Twitter link). He adds that the contract includes $30.7MM in guaranteed money. 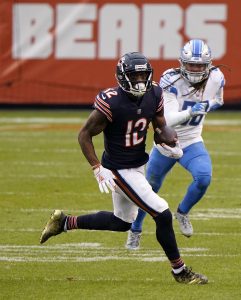 Robinson, 28, has spent four seasons with each of the Jaguars and Bears. Despite playing with underwhelming quarterbacks throughout most – if not all – of that span, he has established himself as one of the league’s most productive possession receivers. He has three 1,000 yard seasons to his name.

However, his time with the Bears was thought to be coming to an end before the 2021 season had finished. With the exception of 2017, where he only appeared in one game, the former second rounder produced career-lows statistically. He totalled 38 receptions for 410 yards and a single touchdown.

That lack of production created the possibility of a depressed market for his services. However, many saw the disappointing campaign more as an indictment of Matt Nagy and the Bears’ overall struggles on offense than a sign of Robinson slowing down. That, coupled with the fact that other top options such as Davante Adams and Chris Godwin were franchise tagged (and subsequently extended, in the latter’s case) left the Penn State product at the top of the list in terms of available options.

In Los Angeles, Robinson will join a receiving corps which already includes Cooper Kupp and Robert Woods. With newfound money due to Von Miller leaving in free agency, the team could afford a splashy signing such as this one. However, ESPN’s Adam Schefter adds that the Rams “still have money left over for Odell Beckham Jr. and hope to re-sign him” (Twitter link).

While it remains to be seen if Beckham remains in L.A. now, the Rams have, in any event, upgraded what was already one of the league’s best passing attacks. With Matt Stafford in place, along with an even more talented skill-position core around him, they should remain firmly in contention to repeat as Super Bowl champions.