The Bears are eyeing some reinforcement at quarterback. Veteran QB Trevor Siemian worked out for the Bears today, according to ESPN’s Field Yates (on Twitter). 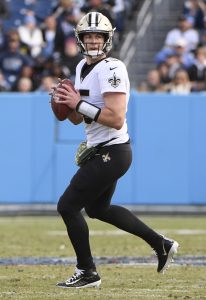 The 30-year-old ended up getting four starts this past season with the Saints, his most starting nods since he was a full-timer with the Broncos in 2017. New Orleans went 0-4 in Siemian’s four starts, with the quarterback completing 57.4 percent of his passes for 1,154 yards, 11 touchdowns, and only three interceptions.

Siemian was 13-11 as a starter during his time in Denver, tossing 30 touchdowns vs. 24 interceptions. He was a seventh-round pick by the Broncos in 2015.

Speaking of Bears QBs, Nick Foles received his $4MM roster bonus the other day. The bonus was fully guaranteed, so it’s not a surprise that the veteran is still on the roster. However, as ESPN’s Courtney Cronin tweets, teams could have some interest in the veteran in-season considering half of his 2022 earnings have already been paid.