The Steelers have made another big splash in the offensive line market. The team is signing guard James Daniels to a three-year, $26.5MM contract, according to NFL Network’s Tom Pelissero (Twitter link). 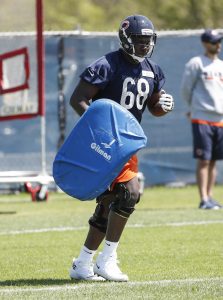 Daniels will see $8.75MM fully guaranteed on this deal, per Spotrac (on Twitter), essentially covering the 2022 season. His cap numbers come in at $4.1MM for 2022 before spiking to $11.1MM in each of the contract’s final two seasons.

The 24-year-old began his career with the Bears. He started 48 of 54 games during that four-year span, establishing himself as a serviceable starter. The former second round pick set a career high in terms of snaps played this past season, with 1,122.

2021 was also his best campaign from an analytical perspective. He earned a PFF grade of 71, making him a solid option in this year’s free agent market. In Pittsburgh, he will join a team that’s been in need of upgrades throughout the offensive front. He will also be re-joining former Bears teammate Mitch Trubisky, who is reportedly joining the Steelers to compete for the starting quarterback role. The pair spent three seasons together in Chicago.

This is the third notable move the Steelers have made regarding their o-line recently. They reached an agreement with Mason Cole yesterday, meaning the unit could look very different when the 2022 season begins. That will likely be a welcome sign for Pittsburgh, as the team continues to re-shape its offense in the post-Ben Roethlisberger era.