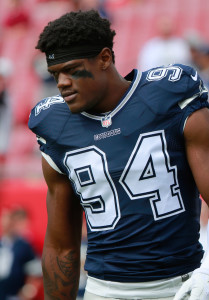 Earlier today, it was reported that the edge rusher would return to Dallas on a five-year, $70MM deal. Instead, Gregory has chosen to join the Broncos for the same terms. Gregory will receive $28MM guaranteed, Jeff Legwold of ESPN.com reports, adding that the Broncos and Gregory negotiated throughout Monday.

It’s not exactly clear when, why, or how the Cowboys agreement fell apart, but this is a fairly common occurrence during the NFL’s legal tampering period. At least one star player per year seems to reach handshake deals — or near-deals — only to pivot to a different team.

Gregory has dealt with injuries and off-the-field issues throughout his career. However, owner Jerry Jones stood by the 2015 second-round pick and he was rewarded with a huge 2021. Last year, Gregory notched six sacks and three forced fumbles, bolstering the Cowboys’ pass rush.

Gregory will turn 30 in November, but due to all of the hiccups in his career, this marked his first foray into free agency. Now, he’s taking full advantage and perhaps giving the Cowboys deja vu of DeMarcus Ware‘s departure.

Defensive coordinator Dan Quinn — who helped guide Gregory to a career year — said that he wanted to see Gregory in Dallas for “years to come.” Now, he’ll have to settle for watching him on TV.