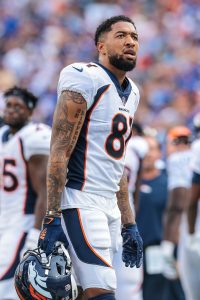 This will keep Fant on his rookie deal through the 2023 season. Because Fant has not made a Pro Bowl but has logged a participation rate north of 50%, he qualifies for the third-tier option price ($6.85MM). This will give the Seahawks a longer look at the tight end acquired in the Russell Wilson trade.

This marks the first time the Seahawks have exercised a fifth-year option, which has been in place since the 2011 CBA. The team passed on the option for James Carpenter (2011), Bruce Irvin (2012), Germain Ifedi (2016) and Rashaad Penny (2018). Given 2019 first-rounder L.J. Collier‘s usage rate, the defensive end is not an option candidate. The 2020 CBA introduced the tiered option structure, giving teams more to consider due to the options now being fully guaranteed.

Joining Drew Lock and Shelby Harris in coming over from Denver last month, Fant is set to become one of Seattle’s top pass catchers. The Iowa alum did not become a top-flight tight end in Denver, but the Broncos’ longstanding issues at quarterback limited just about all their targets in recent years. Fant caught 68 passes for 670 yards and four touchdowns last season — similar numbers to a 2020 season spent with Lock as his quarterback.

That 2020 season — a 62-catch, 673-yard, three-TD slate — could prove relevant considering Lock’s presence. The Seahawks have repeatedly praised their quarterback acquisition, unsurprisingly, and have not added competition. That could well come in the draft or via a Baker Mayfield trade. For now, however, Lock is in position to have a strong chance at another starting gig.

Having run a 4.50-second 40-yard dash at the 2019 Combine, Fant combined for 18 touchdowns in his final two Iowa seasons. This topped Hawkeyes teammate T.J. Hockenson by a considerable margin. The Lions plan to pick up Hockenson’s option, which will cost slightly more due to his Pro Bowl nod. Fant, 24, played with numerous starting quarterbacks in Denver, which also saw Albert Okwuegbunam eat into his target share when healthy. A case can certainly be made Fant has a higher ceiling to reach with his new team. Fant will join Will Dissly in Seattle. The Seahawks re-signed the injury-prone tight end to a three-year, $24MM deal last month.