Colts, Foles Getting Close To Deal

After reports that Indianapolis was open to adding a veteran quarterback to their roster, behind recent addition Matt Ryan, Mike Garafolo of NFL Network reports that a deal is in the works for the Colts to bring in Nick Foles. The move would reunite Foles with Colts head coach Frank Reich, who served as his offensive coordinator during their Super Bowl run with the Eagles. 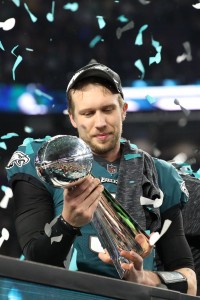 At the Colts’ rookie minicamp a week ago, Reich was asked specifically about the possibility of signing Foles, who was released by the Bears at the end of April. “We’re always looking at who makes this team better, at every position,” Reich said. “Who are the available veterans? Who can we still sign? [GM] Chris [Ballard] is very methodical about that process. We’re not in a rush. There is a timing to the way things go, and the way the roster is put together, that is very intentional.”

Foles and Reich have a strong relationship, and Foles recently said, “I learned more with [Reich] and that staff in that season in 2017 than I ever have.”

Foles’ subsequent stints with the Jaguars and Bears were eminently forgettable, but he would certainly represent a qualified backup for Ryan. And that could be critical for a team that saw firsthand in 2021 how an inexperienced backup can negatively impact a season

In a close game against the Rams in Week 2 of the 2021 campaign, Jacob Eason replaced starter Carson Wentz, who had suffered two sprained ankles. Eason, a 2020 fourth-rounder who was seeing his first regular season action, promptly threw a crippling interception and finished the game 2-for-5 for 40 yards and the pick. He was waived a month later.

Foles will be competing for the backup spot with second-year quarterbacks Sam Ehlinger out of Texas and James Morgan out of Florida International, as well as rookie undrafted free agent Jack Coan out of Notre Dame. According to Garafolo, the deal is expected to be finalized early next week.

2 comments on “Colts, Foles Getting Close To Deal”