7:24pm: An MRI has confirmed that Cohen ruptured his Achilles, per ESPN’s Adam Schefter (on Twitter).

5:54pm: After missing most of the 2020 NFL season with a torn ACL and MCL, as well as a tibial plateau fracture, and missing the entire 2021 season recovering from those injuries, former-Bears running back Tarik Cohen may be looking at another unfortunate setback. According to Jonathan Jones of CBS Sports, Cohen looks “to have suffered a serious lower-leg injury during a workout (that he was) streaming on IG Live.” 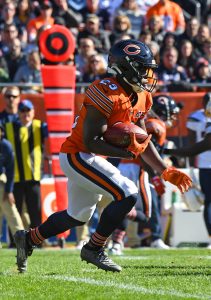 Cohen was a fourth-round draft pick for Chicago in 2017 after an outstanding career at the HBCU North Carolina A&T. Splitting carries with now-Eagles running back Jordan Howard as rookie, Cohen worked mostly as the team’s receiving back. In his sophomore year in Chicago, Cohen blossomed in his assigned role breaking out for 725 receiving yards and 5 receiving touchdowns, in addition to his 444 yards rushing and 3 rushing touchdowns. He also threw two touchdown passes in his first two years with the Bears.

In his third year, Cohen was only able to see three games of action before suffering his major knee injuries. They sidelined him for the rest of the year and he sat out the following year, as well, in an effort to work back to full health.

Cohen was released by the Bears two months ago and was working towards finally making a comeback from his injuries as a free agent. Unfortunately, if the reports are accurate, it appears that Cohen’s comeback bid may have to wait a bit longer.