The Chiefs only have a few more days to extend offensive tackle Orlando Brown Jr., but it sounds like a deal won’t materialize before Friday’s deadline. Brown’s camp told NFL Network’s Mike Garafolo (Twitter link) that the sides are nowhere close to a new deal and the player won’t sign an extension “just to do a deal.” Garafolo warns that Brown could miss training camp and even the start of the regular season. 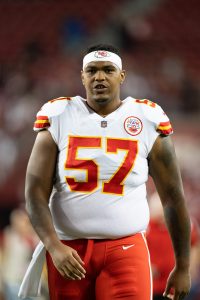 Ever since the Chiefs slapped the offensive lineman with a $16.7MM franchise tag, we’ve heard that the player was seeking a new deal that would make him the NFL’s highest-paid offensive lineman. According to Garafolo, the Chiefs are willing to pay Brown money that would top the right tackle market but not the top of the OL/LT market. Of course, Brown asked for a trade out of Baltimore because of his desire to play left tackle. The Chiefs ended up acquiring him and letting him play his preferred position, so it’s certainly notable that the front office is turning to RT values during negotiations.

Brown hasn’t inked his franchise tender, so he won’t be fined for missing any training camp time. That provides the lineman’s camp with some leverage assuming they truly plan to stage a holdout. As our own Sam Robinson recently pointed out, the Chiefs have just one O-lineman, Joe Thuney, signed to a notable veteran deal, so it would seem the franchise is prepared to give Brown a big-ticket extension. It’ll be interesting to see if the Chiefs front office plays hard ball or extends their budget as they look to focus in on the upcoming campaign.

The two sides have sounded optimistic about a long-term deal throughout the offseason, and the Chiefs have made it clear that they valued Brown as a long-term option during their 2021 OL overhaul. We may have received some hints about a potential holdout earlier this offseason; when asked about the AFC West arrivals of Chandler Jones, Khalil Mack and Randy Gregory, Brown said it is “not the year to go into the season with a backup left tackle.”

The former third-round pick quickly transformed into a starter for the Ravens, and he established himself as a Pro Bowl right tackle in both 2019 and 2020. Last offseason, he was traded (along with a second- and sixth-round pick) to the Chiefs for a first-round selection. During his first season in Kansas City, Brown earned another Pro Bowl selection while appearing in 100 percent of his team’s offensive snaps. Pro Football Focus ranked Brown 28th among 83 qualifying offensive tackles.