The Dolphins and franchise-tagged tight end Mike Gesicki “have not really engaged” in contract talks, as Mike Garafolo of the NFL Network reports (video link). Gesicki, who signed the franchise tender back in March, is set to earn $10.9MM in 2022. 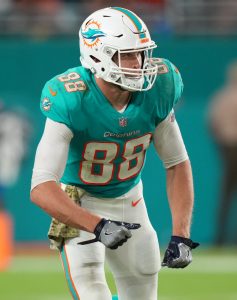 In April, Gesicki offered a few comments on the matter that made it sound as if Miami was not prepared to commit to a long-term contract for its 2018 second-rounder, even though the club is willing to keep him in the fold on an eight-figure salary for the upcoming season. “I am absolutely open to negotiation, but it’s not really up to me,” he said. “If they reach out, my agent will be listening.”

Since those comments were made, the Browns and fellow franchise-tagged TE David Njoku agreed to an extension that features an average annual value just shy of $14MM, making Njoku a top-five tight end in terms of AAV. Gesicki, who has thus far been the more productive of the two players, will doubtlessly be trying to top that mark, as well as Njoku’s $28MM in practical guarantees.

The deadline for tagged players to sign multi-year deals is July 15. Garafolo acknowledges that deadlines spur action, and that a deal can theoretically come together over the next few days. However, given that there have been virtually no negotiations to this point, it seems as if player and team will be revisiting the situation in 2023. At that time, Gesicki could well be the top tight end on the free agent market, particularly if Cowboys and TE Dalton Schultz — another player who has been slapped with the franchise tag — can work out an extension before July 15.

If the Dolphins want to hit Gesicki with a second franchise tag next offseason to prevent him from getting to the open market, they would be committing to a salary of roughly $13.08MM — 120% of his 2022 pay — which is still below Njoku’s AAV and which would seem to be a reasonable price point for a player like Gesicki, assuming he continues performing at the level he has established over the past several seasons. If, as Gesicki suggests, the team is the party that has been reluctant to engage in contract discussions, that could be one of the primary reasons why.

From 2020-21, the Penn State product has averaged a 63/741.5/4 triple-slash despite a less-than-ideal quarterback situation. While QB Tua Tagovailoa is still a major question mark, the ‘Fins have invested heavily on the offensive side of the ball this year, bringing in the likes of WR Tyreek Hill, LT Terron Armstead, and RBs Chase Edmonds and Raheem Mostert, among others. With improved O-line play and a stronger cast of skill position players, Tagovailoa could be well-positioned to live up to his potential in his third professional season, which should improve Gesicki’s stock.