Eagles To Trade J.J. Arcega-Whiteside To Seahawks For Ugo Amadi

Amidst a day of roster cuts and player activations and signings, a rare player-for-player swap is taking place. The Eagles are sending tight end J.J. Arcega-Whiteside to the Seahawks in exchange for safety Ugo Amadi (Twitter link via NFL Network’s Tom Pelissero). 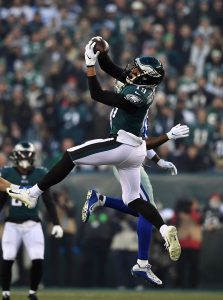 Arcega-Whiteside was one of several notable draft investments the Eagles have made at the wide receiver position recently. The 2019 second-rounder came to Philadelphia with significant expectations given his size (six-foot-two, 225 pounds) and production at Stanford. Things haven’t gone according to plan, however, as he has failed to secure a full-time starting role across three seasons in the NFL.

After totaling just 16 catches in his first 40 games, the Eagles decided this offseason to move the 25-year-old to tight end. With the likes of first-rounders Jalen Reagor and DeVonta Smith, as well as draft-day trade acquisition A.J. Brown at the position, that transition was Arcega-Whiteside’s clearest path to playing time. The same may not be true in Seattle, however; Bob Condotta of the Seattle Times tweets that the Seahawks plan to play Arcega-Whiteside at WR, where he will compete for a secondary role behind DK Metcalf and Tyler Lockett.

The news of a trade is particularly noteworthy in Amadi’s case. ESPN’s Brady Henderson reported (on Twitter) earlier today that the 25-year-old was going to be among the Seahawks’ first round of roster cuts. By acquiring him via trade, the Eagles avoid the possibility of another team claiming him. A fourth-round pick in the same draft as Arcega-Whiteside, Amadi started 12 games between 2020 and 2021. He played a career-high 691 defensive snaps last season, and recorded 54 tackles for the second consecutive season.

The five-foot-nine, 201-pounder will add depth on the backend for the Eagles. Safety was seen as an area of need for much of the offseason after the departure of Rodney McLeod, and Amadi will now look to carve out at least a rotational role behind starters Anthony Harris and Marcus Epps.

Both players will get a fresh start in advance of a contract year, and look to build their free agent values while reinforcing potential weak points on their new teams’ respective rosters.

17 comments on “Eagles To Trade J.J. Arcega-Whiteside To Seahawks For Ugo Amadi”