Despite Jalen Reagor ending up on the Eagles’ 53-man roster Tuesday, he will not play a third season with the team. The Vikings will acquire the former first-round pick, Adam Schefter of ESPN.com tweets. 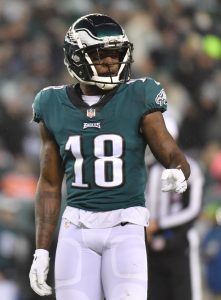 Philly is parting ways with the third-year wideout for a 2023 seventh-round pick and a conditional 2024 pick. The latter selection will either be a fourth- or fifth-rounder. Reagor came up in trade rumors fairly consistently this offseason, and the Eagles are moving on. Two years remain on Reagor’s rookie deal.

Two years ago, the Eagles faced a decision between TCU’s Reagor and LSU’s Justin Jefferson. The room was believed to be split, but Reagor won out. The Vikings took Jefferson. That move worked out pretty well. Minnesota, which has seen Jefferson rocket to the Pro Bowl tier quickly, now has both the 2020 first-rounders.

Reagor will be expected to fill in behind the likes of Jefferson and Adam Thielen. The Vikings also have 2020 draftee K.J. Osborn, who is ticketed to again be their No. 3 wideout. The Vikings did just lose Bisi Johnson to a season-ending ACL tear.

Although Reagor showed some promise in his third Eagles training camp, he has come in far below expectations during game action. Reagor failed to exceed 400 receiving yards in each of his two seasons, missing time with an injury as a rookie and seeing the Eagles add at the position (DeVonta Smith) and shift to a run-heavy attack in 2021. Philly made a considerable effort to upgrade its receiving corps this year. After pursuing Christian Kirk and Allen Robinson, the Eagles acquired A.J. Brown during the draft and gave him a monster guarantee. The addition of former Nick Sirianni Colts charge Zach Pascal may have made a bigger impact on Reagor’s standing.

For his career, Reagor has 64 receptions for 699 yards and three touchdowns. Inconsistency has plagued the second-generation NFLer, however, and the Vikings will try to coax supporting-cast production from the once-coveted Big 12 prospect. Reagor, 23, delivered his best college season as a sophomore — a 1,061-yard, nine-touchdown campaign — before posting 611 yards in 12 junior-year games. The 5-foot-11 talent, who ran a 4.47-second 40-yard dash at the 2020 Combine, still became a top receiver prize in a loaded draft, going 21st overall.

Teetering on the bust cliff, Reagor should at least enjoy a friendlier situation in Minnesota. Carson Wentz struggled mightily during his final Philly season, and Jalen Hurts‘ first starter year turned the Eagles into a smashmouth force. Kirk Cousins certainly is not a top-tier quarterback, but he has proven more consistent as a passer than the QBs Reagor has played with as an Eagle. New Vikes HC Kevin O’Connell will attempt to salvage the downtrodden target.

29 comments on “Eagles To Trade WR Jalen Reagor To Vikings”