The Commanders were left with injury concerns along the defensive line after yesterday’s game. One of the top young members of the unit will not be returning in 2022. NFL Network’s Ian Rapoport reports that rookie Phidarian Mathis suffered a meniscus tear which will require season-ending surgery (Twitter link). 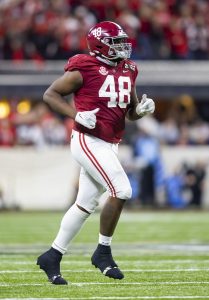 Mathis went down during the first quarter of his regular season debut; his reaction at the time of the injury suggested that he would be sidelined for a significant period of time. The fact that he will, for all intents and purposes, miss his entire rookie campaign is a significant blow for him individually and the team in general.

Across a four-year career at Alabama, Mathis become increasingly productive with each passing season. As a junior, he began to show pass-rush potential with five tackles for loss. Last year, he took another major step forward with nine sacks and 10.5 TFLs. That level of development made him a second-round pick, and one who projects to have a key role in Washington for years to come.

The 6-4, 312-pounder was in line for a rotational role in 2022, but the uncertainty surrounding Daron Payne‘s contract future left open the possibility that Mathis could become a starter next year. Even if Payne departs in free agency, this injury will stall Mathis’ NFL development considerably. For the rest of this season, at least, Washington still has Jonathan Allen and Daniel Wise as internal options along the d-line.

Allen also suffered an injury yesterday, though he described it as “minor.” Nevertheless, head coach Ron Rivera confirmed that the team is considering “several names” with respect to potential additions (Twitter links via Nicki Jhabvala of the Washington Post). Those could come in the form of a practice squad promotion whereby David Bada would be brought up to the 53-man roster, or an outside acquisition. Either way, moves are likely to be made with increased urgency given the seriousness of Mathis’ injury.