Andre Roberts‘ 13th NFL season will be delayed. The Panthers moved the veteran return specialist to their IR list Tuesday. 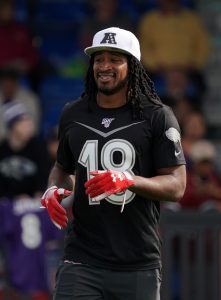 Signed as a free agent this offseason, Roberts was available for three returns in his Carolina debut. But a PCL sprain will halt his season, Tom Pelissero of NFL.com tweets. Although Roberts would be eligible to return after four games, he is likely looking at a longer absence.

The former Cardinals third-round pick has become a return-man hired gun as his career has progressed. The Panthers are Roberts’ ninth team. He has moved from the Cardinals to Washington to the Lions to the Falcons to the Jets to the Bills to the Texans to the Chargers to his current team.

Roberts, 34, has made a considerable impact as a special-teamer over the past several years, having been named to three Pro Bowl squads and having been named a first- or second-team All-Pro three times as well. That attracted free agency interest. Carolina added Roberts on a one-year, $1.75MM deal this offseason.

Roberts led the league in kick-return yardage (1,010) last season and notched his sixth career return score. Shortly after signing with the Chargers during the 2021 campaign, Roberts returned a kick for a touchdown. He has three punt-return TDs and three kick-return scores as a pro. All of those plays have come since the 2015 season. The Panthers used Roberts in both return spots Sunday.