Giants To Bring Back Landon Collins

Landon Collins‘ Giants visit did not immediately produce a deal, but the sides nevertheless will agree to reunite. Collins is joining the Giants on Thursday, Josina Anderson of CBS Sports tweets.

It is a practice squad deal, according to Fox Sports’ Ralph Vacchiano (on Twitter). Collins played for the Giants from 2015-18, making three Pro Bowls with the team, but left as a free agent in 2019. The Commanders made him a cap casualty earlier this year. 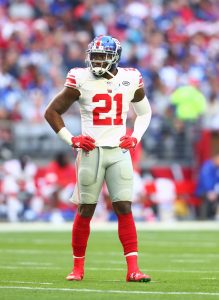 Although Collins operated as a pure safety during his first tour with New York, ESPN.com’s Jeremy Fowler notes the current Giants regime is planning on using him as a linebacker (Twitter link). Collins played a hybrid role to close out his Washington tenure. The Giants have been active in bolstering that position this week, having also reached an agreement with veteran off-ball ‘backer A.J. Klein, who joins Collins on Big Blue’s P-squad.

The Giants now have a host of recognizable names at inside linebacker, having reunited with Jaylon Smith as well. The former Cowboy standout-turned-Giants 2021 spot starter saw the most usage alongside Tae Crowder at linebacker for the Giants in Week 4. Smith’s 2022 Giants debut involved 31 defensive snaps. Between Smith, Collins and Klein, it is safe to say the team — which made Blake Martinez a surprise 11th-hour cut — viewed this position as a belated priority.

As for Collins, this is certainly an interesting reunion. The Giants did not make him an offer to stay in 2019, when the former second-round pick’s previous level of play made him a franchise tag candidate. Big Blue passed there, too, leading Collins to Washington on a then-safety-record six-year, $84MM deal. Washington, which changed regimes a year after Collins’ arrival, cut bait on that deal halfway through.

Pro Football Focus viewed Collins as a plus run defender last season, and Ron Rivera‘s club wanted Collins back — just not on a $16.1MM cap number. After the sides could not reach a pay-cut agreement, the Commanders designated Collins a post-June 1 cut. No free agency buzz followed the seven-year veteran, who will obviously take a substantial pay cut to continue his career.

While Collins drifted off the Pro Bowl radar in Washington, he earned invites from 2016-18 in New York. Collins’ 2016 breakout season led to first-team All-Pro acclaim. That year, the Alabama product delivered versatile work (125 tackles, four sacks, five interceptions) to establish himself as one of the league’s top young safeties and help the Giants to their most recent playoff berth. Once the Giants canned GM Jerry Reese, it became clear replacement Dave Gettlemen did not value him on the same level. But after the Gettleman regime let Collins walk, he will circle back to the Giants under a third regime.

2 comments on “Giants To Bring Back Landon Collins”