OCTOBER 9: As expected, Zappe will get his first career start on Sunday, as Jeff Howe of The Athletic tweets. Jones is still targeting a Week 6 return.

OCTOBER 6: The Patriots should not be expected to have their starting quarterback in uniform this week. Although Mac Jones managed a limited practice Wednesday, the second-year passer returning in Week 6 also appears far from a lock. 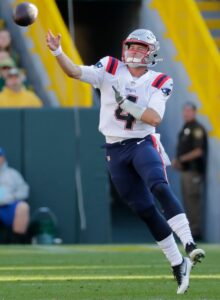 Jones’ injured ankle remains unstable, with NFL.com’s Mike Giardi noting the New England starter is still limping. While Giardi adds Jones is moving around better than he did to end the Pats’ practice sessions last week, ProFootballNetwork.com’s Aaron Wilson notes Jones is not believed to be particularly close to returning.

This is not exactly surprising news; Jones is believed to have sustained a “pretty severe” high ankle sprain. Nevertheless, the former first-round pick is making his case to the Pats’ staff to return in Week 5 against the Lions, Wilson adds, but Week 6 — against the Browns — is viewed as the likelier return window.

As for Sunday, the Pats are likely to go with Bailey Zappe. Brian Hoyer is not expected to be cleared from concussion protocol in time for New England’s Week 5 contest, Wilson adds, clearing the way for the team’s third-stringer to make his first start. Zappe, whom the Pats chose 137th overall, completed 10 of 15 passes for 99 yards and a touchdown in the Pats’ overtime loss to the Packers. Zappe transformed his stock last year by breaking Joe Burrow‘s Division I-FBS record with a 62-touchdown pass season in his lone Western Kentucky campaign. Playing in a pass-crazed system, Zappe’s 5,967 passing yards topped the FBS field by over 1,000.

The Patriots signed Garrett Gilbert to their practice squad this week. Signs now point to the Pats sporting a Zappe-Gilbert depth chart against the Lions. Gilbert is the only quarterback on New England’s P-squad.

21 comments on “Mac Jones Unlikely To Return In Week 5”