The Broncos are not the only team in London navigating trade rumors. At 2-5, the Jaguars are in that boat. And their top pass rusher is generating interest.

Teams are eyeing Josh Allen as a trade piece, Jeremy Fowler of ESPN.com tweets. It is uncertain if the Jaguars are willing to move on from Allen, but the team is now two regimes removed from the edge rusher’s arrival. 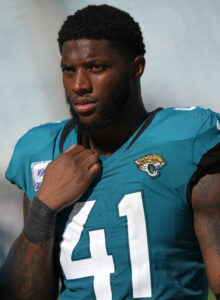 Since going seventh overall in 2019, Allen has become one of the league’s better pass rushers. The Kentucky alum has not matched his rookie-year sack production (10.5); that season produced his only Pro Bowl nod. But Allen has been Jacksonville’s top edge presence during this span. Allen is off to a hot start this season, tallying 11 quarterback hits to go with three sacks and two forced fumbles. Pro Football Focus slots him just inside the top 15 among edge defenders.

Although the Jaguars picked up Allen’s fifth-year option ($10.89MM), no known extension talks have taken place. Then again, teams commonly exercise the option and wait until ex-first-rounders’ contract years before entering serious negotiations. Allen, 25, being signed through 2023 gives Jacksonville some options as it attempts another rebuild.

The Jags drafted Allen during Tom Coughlin‘s stint alongside Dave Caldwell. They moved on from Coughlin later in 2019 and canned Caldwell a year later, pivoting to Urban Meyer. Doug Pederson and Trent Baalke, who worked with Meyer but operated beneath the brief Jags czar in terms of personnel power, are now running the show. That duo chose Georgia edge Travon Walker No. 1 overall.

With 2020 first-round pick K’Lavon Chaisson not catching on as a reliable starter, however, Allen is a bit more valuable. Unloading him would create a clear need at a premium position, so it would likely take a splashy return to convince the Jags to move on. An Allen extension would pair well with Walker’s rookie contract. The Jags have Walker signed through 2025, and they could play his rookie deal similarly to Allen’s, waiting until Year 5 for extension talks — if Walker turns out to be a player the franchise wants to extend.

The Jags’ London opponent is navigating a similar situation, with former Broncos first-round pick Jerry Jeudy drawing interest despite being under contract beyond this season. This matchup of 2-5 teams might not carry too much weight for AFC playoff standing, but it may end up having a major impact on this year’s trade deadline.