Already dealing with one notable injury, Aaron Rodgers was even more banged up by the end of Green Bay’s loss to the Eagles Sunday night. Rodgers exited the game in the third quarter with a rib injury, and did not return. 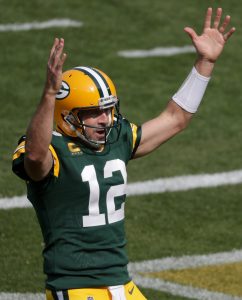 The reigning MVP confirmed last week that he has been playing through a broken thumb in his throwing hand for much of the season, one in which his and the team’s performance have not been up to par. While he insisted that he would not miss time as a result of the injury, the idea of an IR stint to close out the season once the Packers fall out of contention has been brought up.

Rodgers was noticeably in pain leading up to his departure from the game, and was initially thought to have suffered an oblique injury. The 38-year-old said after the game, however, that he feared he had broken ribs; X-Rays were inconclusive in determining whether or not that was the case. As a result, he will undergo further testing today (video link via Ian Rapoport of NFL Network).

With Rodgers sidelined last night, Jordan Love filled in with his third appearance of the season and just the ninth of his career. The 2020 first-rounder went 6-for-9 passing with 113 yards and one touchdown in relief, potentially offering a small glimpse of what he could do in a showcase for the remainder of the regular season. Depending on the results of Rodgers’ tests, however, the latter intends to keep playing.

“As long as we’re mathematically alive, I’d like to be out there,” Rodgers said after the game. Green Bay sits at 4-8, leaving them with a very narrow path to an NFC Wild Card berth. That, coupled with his health status, could lead to calls for Love taking over to finish out the season – something which, if it were to take place, would invite serious speculation on Rodgers’ playing future given the presumed year-to-year nature of his sizeable extension signed this offseason.

As the Packers await further information on Rodgers regarding his health, the team will turn its attention to this Sunday’s contest against the Bears. Who will be under center for them for that game, and beyond, will remain a storyline worth watching in the coming days.

37 comments on “Latest On Aaron Rodgers”