An intra-NFC North trade is going down. The Lions are sending tight end T.J. Hockenson to the Vikings, Adam Schefter of ESPN.com reports (on Twitter).

Acquired before the current Detroit regime arrived, Hockenson is under contract through 2023. Four picks are being exchanged in this deal. The Vikings are sending their division rivals a 2023 second-round pick and a 2023 third-rounder, Schefter tweets. The Vikings will receive Hockenson, a 2023 fourth-rounder and a conditional 2024 fourth. The Vikings announced the trade. 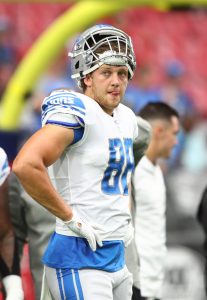 The Vikings are making this move in part because their current top tight end — Irv Smith Jr. — is set to miss time with a high ankle sprain. Hockenson, whom the Lions chose eighth overall in the 2019 draft, will be a higher-profile piece in the Vikings’ offense. At 6-1, the Vikings are dealing into their future asset war chest to add a key playmaker for Kirk Cousins. Smith is expected to be sidelined at least eight weeks, Schefter tweets, helping to explain the big price the Vikings will pay for an upgrade.

This trade comes months after the Vikings traded their No. 12 overall pick to the Lions, who moved up 20 spots to draft Jameson Williams. The Vikes have not shied away from intra-division moves under rookie GM Kwesi Adofo-Mensah. Following the trade-down maneuver with the Lions, Adofo-Mensah traded back with the Packers in the second round, giving Green Bay the Christian Watson draft slot (No. 34 overall).

The Lions now have acquired future assets to help their rebuild. They now own two first-rounders and two seconds in the 2023 draft. Hockenson, 25, represented the final pass-catching piece from the Bob Quinn regime. The Lions had been linked to a possible Hockenson extension; instead, the Brad Holmes regime will start over at tight end.

Although various injuries have cropped up for Hockenson during his four-year Motor City run, he has not missed more than five games in a season. The Iowa product has a 700-plus-yard season on his resume (2020, his Pro Bowl campaign) and hauled in 61 passes for 583 yards and four touchdowns last season — a 12-game slate. This year, Hockenson has 26 receptions for 395 yards and three TDs. The 15.2-yard average, albeit in just seven games, represents by far a career-high mark for the 6-foot-5 pass catcher. Hockenson is tied to a $965K base salary and will be tethered to a fully guaranteed $9.39MM fifth-year option price in 2023.

Minnesota’s passing attack has featured steady Nos. 1 and 2 options for many years, with Justin Jefferson taking over for Stefon Diggs alongside Adam Thielen. The Vikings deployed Kyle Rudolph as their top tight end through the 2020 season and have seen some contributions from Smith. But the former second-rounder out of Alabama missed all of 2021 due to injury and is averaging just 7.6 yards per catch (22 receptions, 168 yards, two TDs) this season. Smith, who caught five touchdown passes in 2020, will move toward the fringes of Minnesota’s aerial hierarchy when he returns from injury. The second-generation NFLer is in a contract year.

At 6-1, the Vikings hold the NFC’s second-best record. They are 3.5 games up in the NFC North and have the tiebreaker over the Packers, who have won this division three years running. With the Packers scuffling and the Lions and Bears rebuilding, the red carpet is laid out for the Vikings to book their first home playoff game in five years. The franchise’s first-year regime parting with two Day 2 assets certainly signals it recognizes the opportunity here.