A Jets offensive line backup for the past four seasons, Conor McDermott is heading out of town. The Patriots are signing the veteran blocker off the Jets’ practice squad, Field Yates of ESPN.com tweets. 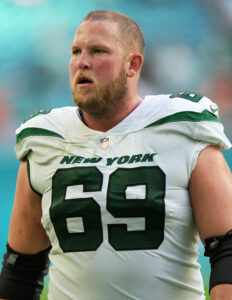 While the Jets have been McDermott’s primary NFL employer, this transaction will mark a homecoming. The Patriots drafted McDermott in the 2017 sixth round out of UCLA.

Amid their early-season issues staffing their tackle positions, the Jets used McDermott to fill the roles opened by the injuries to Mekhi Becton, George Fant and Duane Brown. While Becton is out for the season and Fant remains on IR, Brown has returned. The Jets, who have also seen guard-turned-tackle Alijah Vera-Tucker suffer a season-ending injury, have used journeyman Cedric Ogbuehi as their starting right tackle in recent weeks. McDermott, who has seen time on 18% of the Jets’ offensive plays this season, played against the Patriots in Week 11 but did so as a P-squad gameday elevation.

McDermott, 30, did not make the Patriots’ 2017 roster and only spent a few months with the team post-draft. The Bills claimed the 6-foot-8 lineman and kept him around through the 2018 season. Playing 39% of the Jets’ offensive snaps last season and seeing action on 31% of their 2019 offensive plays, McDermott has played in 43 career games and made six starts.

The Patriots lost O-line starters David Andrews and Isaiah Wynn during their win over the Jets, creating a need for reinforcements. Both are expected to miss time. New England also has its starting right tackle, Marcus Cannon, on IR.